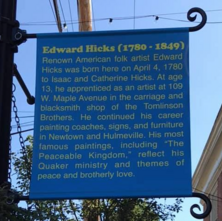 Langhorne is the birthplace of world-renown painter, Edward Hicks, yet there was no evidence of this anywhere in the borough.  LCA obtained approval from HARB and Langhorne Borough Council to display a banner honoring Hicks at his birthplace, now known as the Langhorne Coffee House.  Permission was also given to add banners about other important and interesting people, places, and facts that are largely unknown but that have contributed to the borough’s history. Banners will be hung in late March on light poles using high quality, Victorian-style brackets at a height that makes them easily read by pedestrians.  Because there aren’t street lights throughout the town, banners will be hung on available light poles as close to the location as possible; exact locations will be noted in the banner text. It is hoped that these banners will encourage people to visit, explore, and think about the borough in a new way.  Information about the banners will be printed in a walking tour brochure, to be placed at the Bucks County Visitors Center and other locations, and will be posted on the LCA website; reciprocal links with other sites will be encouraged that will raise awareness of the borough, its businesses, houses of worship, and community organizations.

Support from the community is needed to keep this project moving.  The following banners have been sponsored by generous $175 donations by the individuals, businesses, and organizations listed.  This generosity will be noted in the brochure.  We are currently seeking donations to cover the cost of printing the brochure.

Our sincere thanks go to the following sponsors:


Donations to this project, payable to Langhorne Council for the Arts, can be sent to: